In the occasional conscientious—however pointless—thinkpiece since Trump’s election, members of the media contritely recognized the unholy pact they forged in 2015, when Trump launched his candidacy with a nativist tirade too delicious to ignore. We’re sorry, they seemed to say, but each of then-candidate Trump’s successive affronts was so moist and succulent that it was almost a delicacy, one of those French kinds like foie gras or Ortolan whose classification as such is based in its sheer barbarity. Like all forbidden desires, this one too eventually led to hell—the press is now force-fed ambrosia every moment of every hour, the level of the Inferno reserved for pundits where Beelzebub vomits presidential tweets down journalists’ throats for all eternity.

As of this draft, which I’m writing on December 10, 2018, Trump has published 77 tweets since the beginning of the month. They and the roughly 40,000 that precede them have become so central to American politics that an interesting exercise is to imagine the contemporary zeitgeist without them. It’s doubtful much would change as a matter of policy—the rallies would continue, the executive branch’s HR carousel would spin at the same clip, Trump and Pence would still roleplay paladins defending America against the perpetrators of the War on Coal. But the tweets feel uniquely responsible for the presidency’s timbre, the animating spirit of its era. 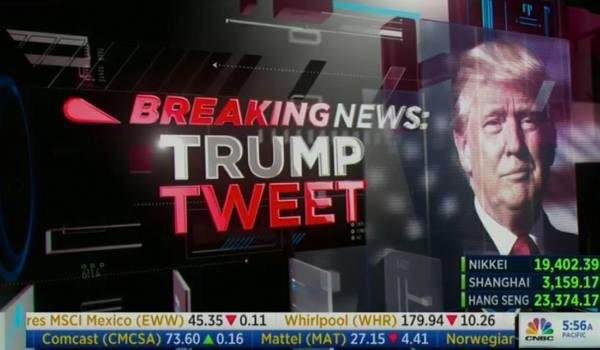 It is the burden of what to do with this informational miasma that whets the appetite of today’s data visualizer, who pours forth pastel vector graphics for Vox, The New York Times, Information is Beautiful, any in a circuitry populated by the “Data junkie, coffee addict, Red Sox fan”. The data visualizer looks across the landscape of 10,000 takes and knows there’s got to be a better way, for where there lies noise must also lie signal! Throughout the Silicon diaspora, from its Valleys to Alleys, he has donned the mantle of artist and philosopher, illuminating the world’s caverns with his torch of candy colored adjacency matrices. The noise is transfigured not just into signal, but into something of beauty. Information is beautiful! Data is beautiful! Holy holy holy!

The data visualizer promises the sublimity of hard-won revelation with the ease of the image. The irreducible truth of any impossibly complex geopolitical event is distilled into one chart. The method of fantasy baseball managers is applied to a political system that now resembles a spectator sport. More than anything else in the world, the data visualizer just wants to Make Something Cool.

The data visualizer has become the newsroom’s resident shaman as of 2016, the year of magical thinking, when each refresh of FiveThirtyEight felt like flipping a tarot card. As the din of political noise drowned their readerships, publications undertook JavaScript arms races to outfit themselves with the winningnest charts and the most sagastic predictive tools. They did this up through November 8, 2016, when they remembered that predicting the future is difficult, that almost no amount of modeling and interactive tools could do it, and then they continued to do it anyway.

Embedded below is the output of a program that every day retrieves the president’s tweets from the current day and adds them to a file containing his entire tweet corpus. The text of each of those tweets is run through Google’s sentiment analyzer, a neural net trained on the company’s dark, limitless cache of text data to score where a piece of text sits emotionally, from -1 for the most negative and 1 for the most positive. The program colors the datapoint of a given word or phrase based on the average sentiment scores in which those words or phrases appeared, and it performs the same calculations for Trump’s hashtags and mentions.

Even though I knew everything I was going to say about this visualization before I created it––that it’s meaningless, that like most everything else in the data visualizer’s oeuvre it is pseudoscientific kitsch––I still can’t help my own satisfaction at its dance, the same mindless delight of opening and closing folders on a phone’s home screen. Look at the rectangles wobble! The lines emerge like vines, the datapoints shuffle like marbles, a bricolage of toys that turn demagogic cacophony into downright fun.

In 1994, at a time when postmodernism had carried fine art a hemispheric distance away from common tastes, the artists Vitaly Komar and Alexander Melamid undertook a massive survey of the popular American sensibility—what did most people, who, as the critic Arthur Danto put it, experienced art “as if modernism had never happened,” actually want? According to the results of the survey, people liked blue. And they liked nature. They preferred paintings with historical figures, and they enjoyed scenes of families. And of course, they rejected the impenetrable conceptualism of our time for the placid lakes of impressionism.

So Vitaly and Melamid produced just that. Their painting, America’s Most Wanted, is the artistic equivalent of a teenager’s concoction of mismatched ingredients made to be eaten on a dare, ketchup on chocolate on hamburger stroked across a canvas and hung at Dia. What America’s Most Wanted can do to a viewer at most, when it achieves its absolute highest potential (and I’m referring to the just the painting, not the entire process—”That work is probably a masterpiece,” Danto wrote), is impress them with the painter’s technical ability to create a landscape scene—to make the trees look like trees, to get the perspectives of distance and proximity true and proper, to accurately render George Washington—and maybe, when all that is done, soothe them with a mix of the nostalgic and the natural. It can leave them with the false idea that they’ve experienced art because they have looked at something art-like. 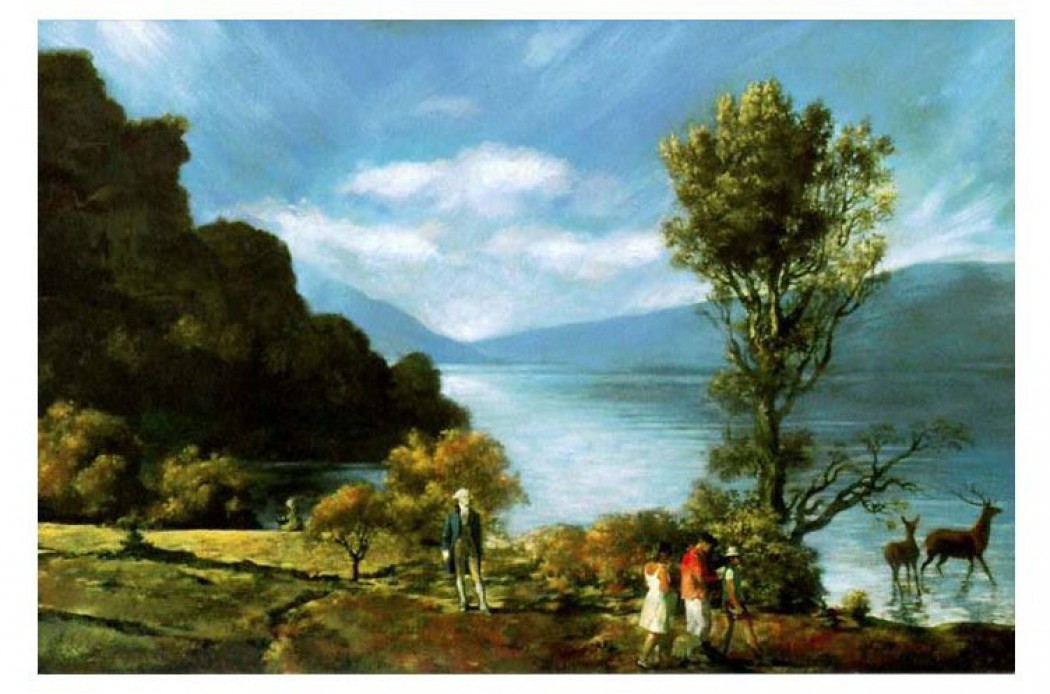 As in the painting, the users of the data visualizer’s work are soothed by a sense of the natural, as objects glide across the screen programmed to appear like physical things. Whether or not the visualization contains some discernible, intelligible idea is irrelevant. What’s important is that it feels idea-like. One leaves its galaxy of dots feeling they’ve grasped the entirety of the presidency’s communications. They feel that amid the noise, there suddenly appear patterns—that the senseless is now sensible.

Douglas Coupland’s biography of Marshall McLuhan recently pointed me to a 2009 article on ZDNet called “Can the Internet change your brain?”, a title now dated by virtue of how fully in the last decade we’ve accepted that it can and does. But 2009 might be considered the heyday of such questions, when technology critics like Nicholas Carr asked “Is Google making us stupid?” and made a career of answering “Yes”. In the article, a neurologist succinctly posed the web’s hazards as such: “Screen thinking is strongly sensational, short in span, has no conceptual framework, no metaphors and favors process over concept.”

“Yes of course,” you, a dutiful New York Times Magazine reader, reply. But in the past ten years our perspective has also reached a convergence that, for the most part, understands the internet’s threats in tandem with its possibilities rather than violently gyrating between the two extremes. It’s difficult to maintain that the medium is always the message when so much thoughtful work appears online. And yet the neurologist’s diagnosis is likely more apt than not. The data visualization is often (and the work of our data visualizer is always) pure process, dispossessed of all concepts, aesthetically barren. Running against narrative, introspection, and subtlety, it is so politically contemporaneous that it is perhaps our most Trumpian form of all. What promises to rise above noise is the same noise hypercondensed, taking the broader spectacle of the media and compacting it into an aphoristic form.

The result is that the data visualization sates the appetite for the image while swearing it’s something else. It produces a form of apophenia, the phenomenon of seeing patterns where none actually exist, common in experiences of psychosis or hallucination, and what happens when one gazes up at clouds and sees faces and foliage and barking dogs. The artist Hito Steyerl wrote about apohenia when considering what comes from the National Security Agency’s endless trove of noise:

One has to assume that sometimes, analysts also use apophenia.

Someone must have seen the face of Amani al-Nasasra in a cloud. The forty-three-year-old was blinded by an aerial strike in Gaza in 2012 in front of her TV: “We were in the house watching the news on TV. My husband said he wanted to go to sleep, but I wanted to stay up and watch Al Jazeera to see if there was any news of a ceasefire. The last thing I remember, my husband asked if I changed the channel and I said yes. I didn’t feel anything when the bomb hit—I was unconscious. I didn’t wake up again until I was in the ambulance.” Amani suffered second degree burns and was largely blinded.

What kind of “signal” was extracted from what kind of “noise” to suggest that al-Nasasra was a legitimate target? Which faces appear on which screens, and why?

Not every pattern is signal. But it’s hard to pull the rapt hallucinators away from the particles floating in the sky when the hallucinations themselves are so delightful. – Andrew Thompson