Every election season brings dismayed cries about horse race coverage trampling over policy discussion; each scandal provokes grumbles about the irrelevance of some politician’s private life to their public role. Today’s news media, the lamentations go, privileges narrative over substance. Such criticism, while valid, fails to account for the necessity journalists face of not simply responding to the journalistic first principal of “Who?”, but giving their readers and viewers a vehicle for relating to, disdaining, or sympathizing with a story. Characters are the most intuitive way of doing this—they’re what separates wire reports on falling home prices from economic tragedy, the quotidian from the visceral.

But even as characters serve to make the news legible, their overemphasis too often turns counterproductive, obfuscating events in a character-driven fog. Just ask any poor soul who watched much CNN, MSNBC, or Fox during the yawning two-year gap between the appointment of a Special Counsel to investigate the Trump administration’s ties to Russia and the submission of his final report this April. With only an anonymously sourced newspaper report dropped here and there to direct them, network anchors were driven into a frenzy of speculation about the handful of characters who were known to be of interest to Robert Mueller. Each host seized on one or two of these figures in hopes that by making an educated guess about who was worth narrowing in on it might be possible to get ahead of the story. 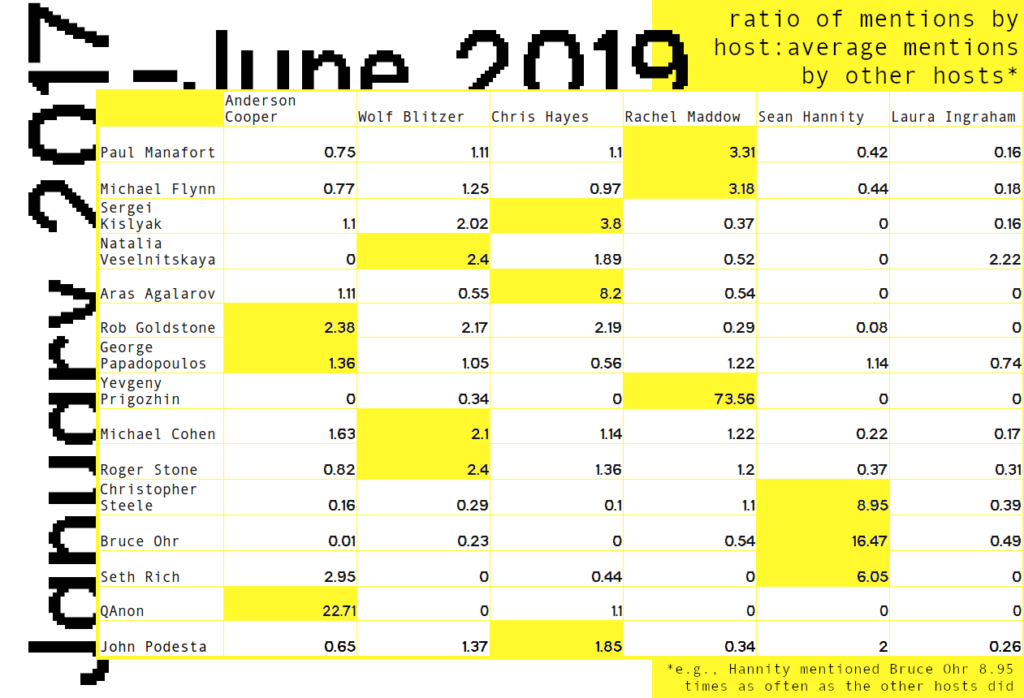 For Rachel Maddow, that meant onetime Trump campaign chairman Paul Manafort and former National Security Advisor Michael Flynn, both of whom she has mentioned three times as often as her peers since the beginning of 2017. Chris Hayes was more interested in the former Russian Ambassador Sergei Kislyak, who Flynn chatted with ahead of Trump’s inauguration. Those particular characters are familiar to even casual followers of the Russia story. Less so is Azerbaijani businessman Aras Agalarov, who helped set up the infamous campaign meeting in Trump Tower between a Russian lawyer and key members of the Trump team. Hayes talked about Agalarov eight times as often as any other host did—a proportion mostly made possible by the fact that the billionaire was never mentioned by Sean Hannity or Laura Ingraham.

Hannity, of course, was much too busy fulminating about two even more obscure players, the former British spook Christopher Steele—who authored the dossier claiming that Russia harbored a trove of incriminating details on Trump—and his handler at the Justice Department, Bruce Ohr. If you only vaguely recognize Steele and have no idea who Ohr is, go ahead and give yourself a hearty pat on the back. Once enigmatic Justice Department officials get involved, one might as well begin picturing men in trenchcoats exchanging briefcases on the National Mall.

This widely divergent focus on different figures in a single story—many of whom are entirely unknown to the average news consumer—reveals just how much guesswork most of the coverage of the Russia investigation involved. When journalists have a handle on a story, the “Who?” could hardly be more obvious. Take the accusations of sexual assault that Christine Blasey Ford leveled against Brett Kavanaugh last fall. In that case, attention on each figure fell along predictable partisan lines: The Fox anchors spoke a bit more about Kavanaugh, while the MSNBC anchors were more concerned with Blasey Ford. One’s perspective on which figure was the hero and which the villain shaped coverage, but it did not determine who was actually being talked about. 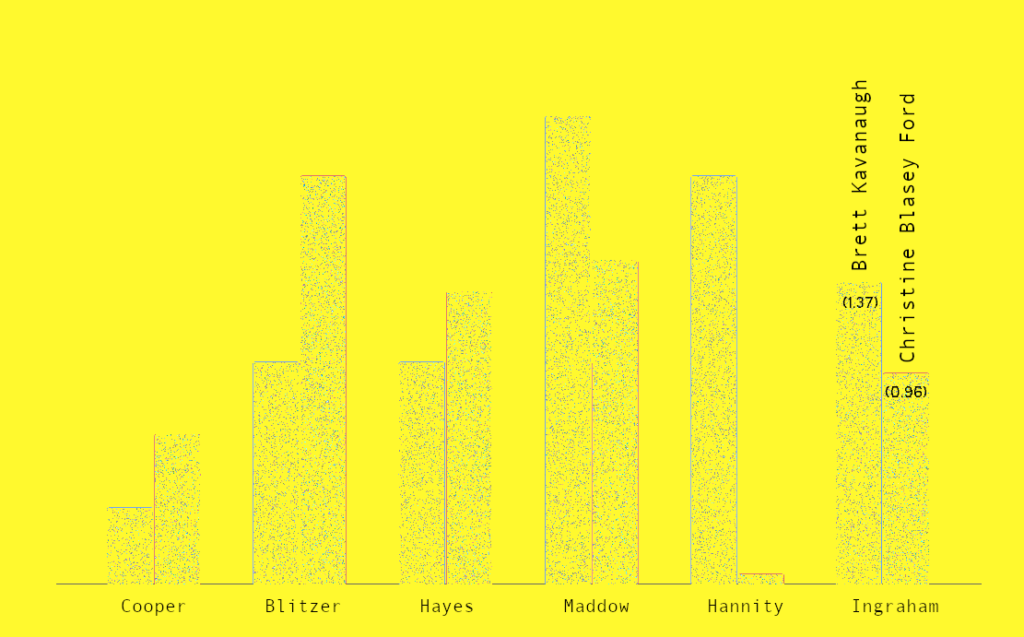 The Russia investigation, on the other hand, was such a mess that even CNN couldn’t quite figure out which characters merited scrutiny. Wolf Blitzer was the most frequent mentioner of Natalia Veselnitskaya, the Russian lawyer present at the Trump Tower meeting, as well as Michael Cohen, Trump’s former lawyer and fixer, and Roger Stone, his longtime confidant. Anderson Cooper is notable for his focus on Rob Goldstone, the British publicist and former tabloid journalist who also helped to facilitate that Trump Tower meeting. Oddly, the figure who found the most parity between the hosts on Fox, MSNBC, and CNN was haplass George Papadopoulos, whose vague role as one of Trump’s foreign policy advisors led him to attempt to arrange a number of meetings between the campaign and Russian officials. The least? Yevgeny Prigozhin—one of Vladimir Putin’s right hand oligarchs—who earned a few deep dives by Maddow, but otherwise went ignored by everyone else except Blitzer.

Viewers of each network, then, had radically different ideas about who the dramatis personae of the Mueller investigation actually were. For MSNBC, it was a set of shadowy Eastern Europeans. For CNN, a cast of Trump-adjacent henchmen. At Fox, the story wasn’t Mueller’s investigation at all, but the so-called Stelle Dossier whose allegations partially precipitated it. Three networks, three different ensembles chosen to perform a preferred version of reality.

Such disparities in attention reinforce the notion that the Trump campaign’s contacts with Russia were not covered as standard issue news, but as a sort of grand scale conspiracy theory. That’s not to say that there was not a real story there, and a serious one—34 people were eventually indicted by Robert Mueller, including all of the Trump associates mentioned above. Still, as the investigation and the obsessive tracking of it on cable news fades into memory, it would be foolish for the press to not pause to scrutinize its approach to the story that dominated headlines going all the way back to December 2016. While the New York Times and The Washington Post have been rightfully lauded for how their reporting was overwhelmingly borne out by the Mueller Report, cable outlets have mostly been able to slink away without being held accountable for how across-the-board awful their coverage was.

Well, with the exception of Rachel Maddow, who has been lambasted from all sides for her repeated implications that Trump was a Russian intelligence asset. But Maddow was far from the only anchor whose pattern of behavior suggested a conspiratorial mindset. Hayes’ disproportionate focus on Kislyak has been more extreme than even Laura Ingraham’s focus on conservative punching bag George Soros. Likewise, Hayes’ attention to Agalarov was even more out of step with his peers than Sean Hannity’s fixation on Seth Rich, the DNC staffer whose murder was outrageously linked to WikiLeaks by fringe sources on the right. These quantifiable differences in focus lend weight to criticism that MSNBC warped the Russia investigation into a progressive version of Benghazi, a partisan fever dream in which an endless series of sliding doors obscured a revelation of wrongdoing so severe as to toss a loathed president out of office.

The ability of both MSNBC and Fox hosts to evade accountability has much to do with the slippery language they use. Maddow is prone to Sherlockian sayings like, “There are other shoes we’re expecting to drop soon”; Hannity to adopting a flabbergasted tone and wondering, “What are they hiding?” Both are nifty formulations for establishing suspicion without making a statement that can be fact-checked or second-guessed. What happens if Maddow’s shoes never drop, or Hannity’s subjects weren’t hiding anything after all? The suspicion floats away into the ether, the anchor already on to the next scandal.

By tracking mentions of actual people, though, contours emerge that illuminate these anchors’ habits of mind and give viewers a better sense of how to weight their inveighings. Hayes has a tendency toward framing his thinking around institutions (he did, after all, write an entire book about the carceral state)—perhaps that explains his interest in Agalarov, an embodiment of how wealth translates into power. The only figure connected to the Russian story Laura Ingraham spent a disproportionate amount of time discussing was Veselnitskaya, which may follow from the fact that Ingraham is the mother of two adopted Russian sons and Veselnitskaya is a leading campaigner to overturn the Obama-era sanctions on Russian nationals that prompted Vladimir Putin to block American parents from adopting children from his domain.

All of this is easily dismissed as the unfortunate cost of partisan news—of course the coverage of Fox News and MSNBC is shaped by the anchors’ biases and agenda, that’s the whole point! Yet the CNN hosts, while certainly driven less by partisan instinct, have hardly been more restrained in their birddogging of quixotic subjects on the periphery of the Russia story, and more broadly. Both the attention paid by Anderson Cooper to Goldstone and Wolf Blitzer’s focus on Stone outpaced even Sean Hannity’s obsession with John Podesta, Hillary Clinton’s campaign chair. And Cooper stands head and shoulders above the pack in terms of his discussion of QAnon, an online conspiracy to unravel the theoretical attempts of the largely illusory “deep state” to depose Donald Trump. The roots of this focus seems to be Cooper’s attempt to tie Trump’s media bashing— which often manifests as attacks on CNN—to QAnon via the presence of a sign reading “We Are Q” at a Trump rally last summer.

Taken all together, these networks’ prioritization of character study over building a holistic narrative is not a bug of one faulty story, but a feature of the cable news engine itself. Roger Stone’s colorful rhetoric and his oft-cited Nixon tattoo make him a great source of content. QAnon, while not a single person, becomes a figurative embodiment of the irrational relationship between those who are Very Online and traditional news sources. For the partisans, John Podesta can be detached from his (limited) newsmaking role during the 2016 campaign and used by Sean Hannity as a boogeyman to evoke the Clintons’ craven lust for power. Paul Manafort, with his foppish style and Ukrainian C.V., becomes Rachel Maddow’s case study for both the tackiness of the Trump camp and its eyebrow-raising sympathy for Eastern European oligarchs.

Separating out these characterizations from cable news reporting is largely impossible. Getting it right isn’t really the point of these channels. The use of these characterizations to create a defined reality separate from what you’ll find on their competitors—that’s the point, and it has been a smashing success. According to Pew, combined revenue at the three stations is up almost 16% since 2016. MSNBC’s fortures in particular rose along with the salience of the Russia story, with the network surpassing CNN to become the second-most watched cable channel behind Fox earlier this year.

However journalistically questionable compared to more traditional uses of characters to enliven news reporting, organizing programming around a few figures that can be obsessed over ad nauseum appears to be delivering on the less noble goal of attracting eyeballs to advertisers. With an online swarm of conspiracy theorists providing an ever renewing well of material, the incentives for established network voices to keep skimming the least laughable of these and presenting them to their viewers with verbiage that drips plausible deniability will only grow stronger. As the media gears up for 2020, the next wave of baseless conjecture is already percolating: This month, Tucker Carlson gave cover to neo-birtherist attacks on Kamala Harris and MSNBC attempted to style the viral FaceApp as a Russian intelligence gathering tool. Without a central character to organize around, such stories will pass away as quickly as they appeared. Look out, though— once a few more oddball, shadowy characters rear their heads, it’ll become all too clear that the era of conspiracy cable is only just getting started.