How much money do people make on Bandcamp?

One of the major angles left entirely unexamined in our initial report on Bandcamp's economics — which analyzed how much the platform was making as a whole, and through what kinds of sales — is how much individual sellers actually earn on the site. The answer, as it turns out, is not a lot.

This is the distribution of income on Bandcamp in 2021, across about 17.4 million sales events and about 706,000 artists: 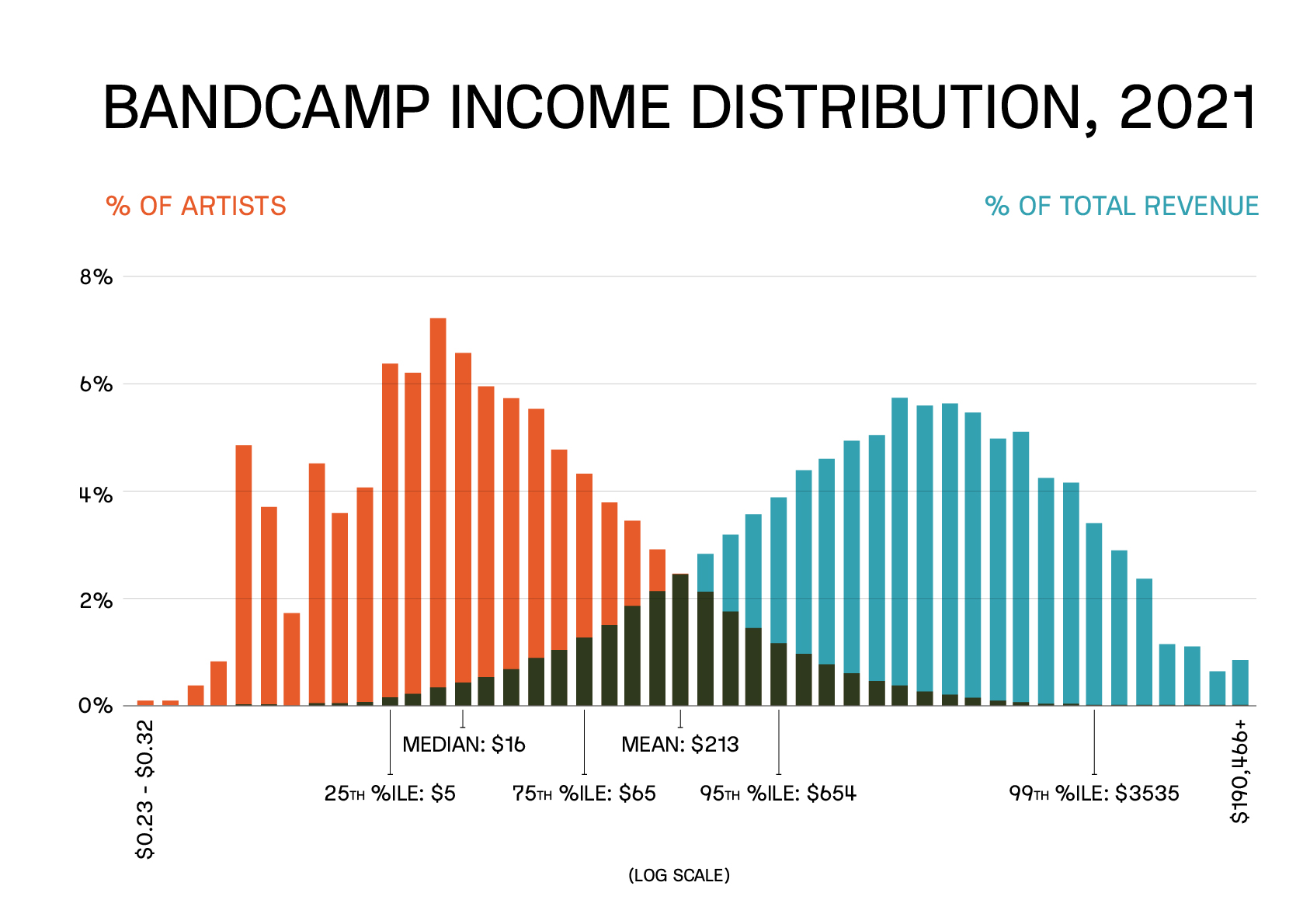 This excludes a few different incarnations of "Various Artists" — which occurs in complications — and it doesn't control for duplicate names of artists, which, based on some cursory inspection, doesn't matter as much as one might think anyway.

In typical fat tail fashion, a sliver of individuals receive the vast majority of the total money earned from the site. (These numbers are counted before fees, taxes, and so on, which means the actual take home pay is even less.) There are a thousand ways to demonstrate just how small a sliver it is. Beyond the quantile statistics in the graph, here are a few more:

While I offer this last statistic to give a sense of scale, I can't emphasize enough that not only does it make an inapposite comparison between national economies and single websites, but that one would likely find similar (probably worse) figures when examining other platforms. For instance, the convolutions of Spotify's payout system, in which artist compensation is a mind-numbing mix of proportional plays per subscriber, all modulated by the intricacies of deals worked out with major labels, almost certainly moves this coefficient closer to 1.

The conditions creating this fat tail distribution and the question of whether or not that distribution is desirable or even avoidable are overshadowed by the triviality of the amounts of money in question. That an artist in Bandcamp's top 1% makes as much from selling music in an entire year as an entry level software developer does in two weeks is probably not the best economic signal, and it's difficult to argue that the company bears much blame for this. Bandcamp was not the one to load up Spotify with enough runway to operate at a loss seemingly in perpetuity, offer products for next to free, and thereby reconfigure the entire economics of the industry.

However, when I argue that the company's long standing complacency should give way to an antagonism towards its competitors (i.e., streaming companies), it is in the interest of raising this baseline. As Components' Jules Becker pointed out, however more gaping the yawn between Spotify's winners and losers, the sheer volume of its userbase means 13,400 artists "generated" at least $50,000 on the platform in 2021, according to the company's own numbers — on Bandcamp, it was 139, a disparity too wide to be explained by Spotify propaganda alone. The wishful thinking I've expressed for the Epic acquisition is that aggressive promotion of their new subsidiary would contribute to a course correction of the music market (along with central banks raising their interest rates that kneecaps companies like Spotify and the entire tech economy). It's entirely possible that this problem becomes worse under them, but we'll see.

There is, though, one small thing I couldn't help but pry out of this data, and while on the one hand it's not so substantial as to even mention alongside the discussion of this graph, my own pet peeves force me to.

To what extent an Album of the Day placement actually boosts earnings is entirely unclear, although I can say with near certainty that it has next to nothing to do with shaping the income distribution curve. And the company's occasional expressions of goodwill can confuse people into believing that it operates as some kind of charity. Not only does it not, but it shouldn't — in the delusional 2010s economy of quantitative easing, its profitability grew into an unexpected virtue, a cornerstone of reality and, within its specific context, genuine value. (As argued in our most recent report, the same is true of most gaming studios, and not true of most startups.)

If elevating a select number of musicians residing in a small network of global hyperreal cities is more profitable than not doing that, then fine, Bandcamp Daily is content marketing, not music journalism (not that music journalists do a better job at veering off this network anyway lol); its job is to increase sales on the platform. And even among the top sliver, most artists are arguably still obscure enough to the general userbase to warrant an introduction. But I would question how much revenue is boosted by featuring the new Burial album compared to someone that readers would simply otherwise have never heard of.